I haven’t gotten to read a lot of books of my choosing the last couple of years because I’ve gone back to school and the textbook reading has been non-stop…especially since I’ve taken classes through 2 summers.  If anything, it’s made me even more determined because if I have to read all this other stuff, I’m damn-well going to read something I want!  So I spend a significant amount of time finding books I want to read in Chapters, Amazon and in my parent’s library.  My sister reads a lot too so she supports my habit on birthdays and Christmas.  When the dreamboat and I find our forever house, I want a library in the dining room.  I can dream!  For now though, here’s a list of what I’ve been reading: Enjoy!

Ahh, the sisters.  I was watching a WWII documentary in the Spring and Unity Mitford was mentioned as one of Hitler’s girlfriends. So I looked her up (I always look stuff up when I’m watching tv: what did we do before laptops, smartphones and ipads???), and it turns out she was part of a fascinating blueblood family in England who were in the news a lot for being so political, on both sides of the spectrum.  I’m fascinated by English nobility at the turn of the century (oh, Downton Abbey!), political families and especially sisters.  These sisters did not disapoint!  I would recomend this book to anyone who likes history and drama, this book had oodles of both!

This one’s a re-read, originally read by me in school…grade 4 or 5 I think.  I remember loving it then, and in line at Chapters a month ago I saw it and freaked out!!!!  I bought it, read it again, and totally understood why my young self was so smitten by it.  It’s about 5 kids and their adventures in a secret world under their playhouse, what kid wouldn’t love that?!?  I’m so excited for my neice to be old enough to read it, I’m almost bursting!  I think it’s so, so important for kids to get a healthy dose of fantasy in their lives.  My imagination, I believe, was formed this way and it’s still a source of immense pleasure and even tangible use for me.

Inside the Land of OG! 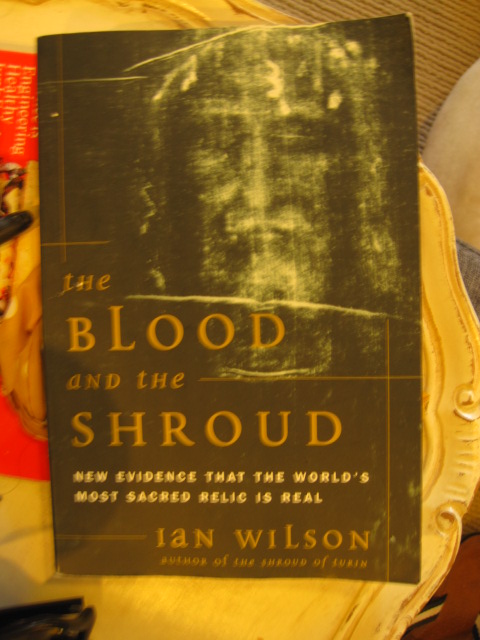 I read this for an online course I’m taking until the end of August, and it’s a fantastic book!  If you’re at all interested in the most studied religious relic of all time and wonder at it’s legitimacy, give this a read for sure.  The book goes through the trial and crucifixion of Christ, the history of the Shroud, the possible scientific explanations for it and reasons why some call it a forgery, as well as the 1988 carbon-dating that declared its origins in Medieval Europe.  This book got me really excited to write a paper on the topic of the shroud, and that’s no small deal!

On the lighter side, I can never resist a book on French style!  This one is replete with drawn pictures and photographs of stylish women, as well as rules, tips and ideas on how to present more like a chic Parisian woman today.  I will use this as a reference for years to come!

A stack of books I’d love to have done by summer’s end…but realistically, I’m hoping to have 2 of them read 🙂  I may be the last person on earth to read the shack, it’s kind of embarassing.  So I should probably get on that first.  The second one down was written by my first religion prof at Trinity, and he kind of blew my mind every class.  I can’t wait to read NT theology and its quest for relevance, because I think this is so relevant for Christians post scientific revolution!  Present Perfect I picked up after I learned I’m a perfectionist, and a perfectionist is not what we’ve always thought it was (!).  I’ve read the first part, it’s very enlightening.  Then we’ve got F. Scott, near and dear to my heart; this was a gift last Christmas, so it’s been waiting patiently in line.  Bill Maher is the Dreamboat’s book, and I always find him equally chalenging (to not want to punch him) and thought-provoking.  I try not to just read stuff I already agree with, and although I do agree with a lot of what he says, I don’t agree with a lot of it too.  It’s a good challenge.  Then last but not least, we have the human trafficking book.  I know this won’t be a feel-good read, but I think it’s so important to be informed on the evil in the world so we can contribute more to the good.

So there you have it, my reading list!  Let me know what you’re reading this summer, good or bad 🙂